Sustainability with a smile

Calendar speaks to Hali Borenstein, the CEO of cult LA fashion brand Reformation, about bringing humour and transparency to the London high street

It’s a mark of how seriously Reformation CEO Hali Borenstein takes the sustainable mission of her business – and how much she understands her customer – that she is just as excited to talk about the brand’s traceable fabric technology, as she is to extol the flattering cut of Reformation’s jeans for your butt.

I first met the LA-based CEO in London, on the eve of Reformation’s new Covent Garden store opening. (The brand is expanding in Europe; another London store is planned in Battersea in November.)

Borenstein was in buoyant form, her UK visit having included a Suki Waterhouse gig (the musician/model/poet is a fan of the brand). She had also met with a besuited group of investors, with whom she had spoken about Reformation’s ingenious FibreTrace jeans (which have each item’s supply-chain data embedded in undetectable scannable pigments). Nor did she omit a reference to their aforementioned, cute-enhancing properties. “Right?” she laughed. “They just make you look great.”

Confidence, humour, and the permission to be an empowered, sexy woman while taking a passionate stand on sustainability is what Reformation is all about. “Our approach is a bit provocative,” explains Borenstein when we catch up again a few weeks later via Zoom. “Even our tagline, ‘Being naked is the #1 most sustainable option. Reformation is #2’ says something really important, but it’s also just provocative and fun.”

The hallmark irreverence is both refreshing and relatable. Take the brand’s just-launched ‘90/10 cashmere collection’ (i.e. 90% recycled/10% virgin), which is reducing Reformation’s carbon impact at a fibre level on a massive scale (specifically, 87% less carbon and 80% less water intensive than conventional cashmere and 80% less water intensive).

The achievement is huge and marks a massive step on the brand’s roadmap to climate positivity by 2025. And yet the campaign’s tagline, ‘90% recycled, 10% terrible’, is candid and, dare we say it, funny. “If you look at the carbon impact of cashmere, it’s bananas. And so, moving to 90% is phenomenal,” says Borenstein. “The conversation we have internally is 90% amazing, 10% we still hate ourselves, but we’re working on it. I think that iterative process is the way we find the most success.” Notably, three more radical material innovations are in train for launch this year. 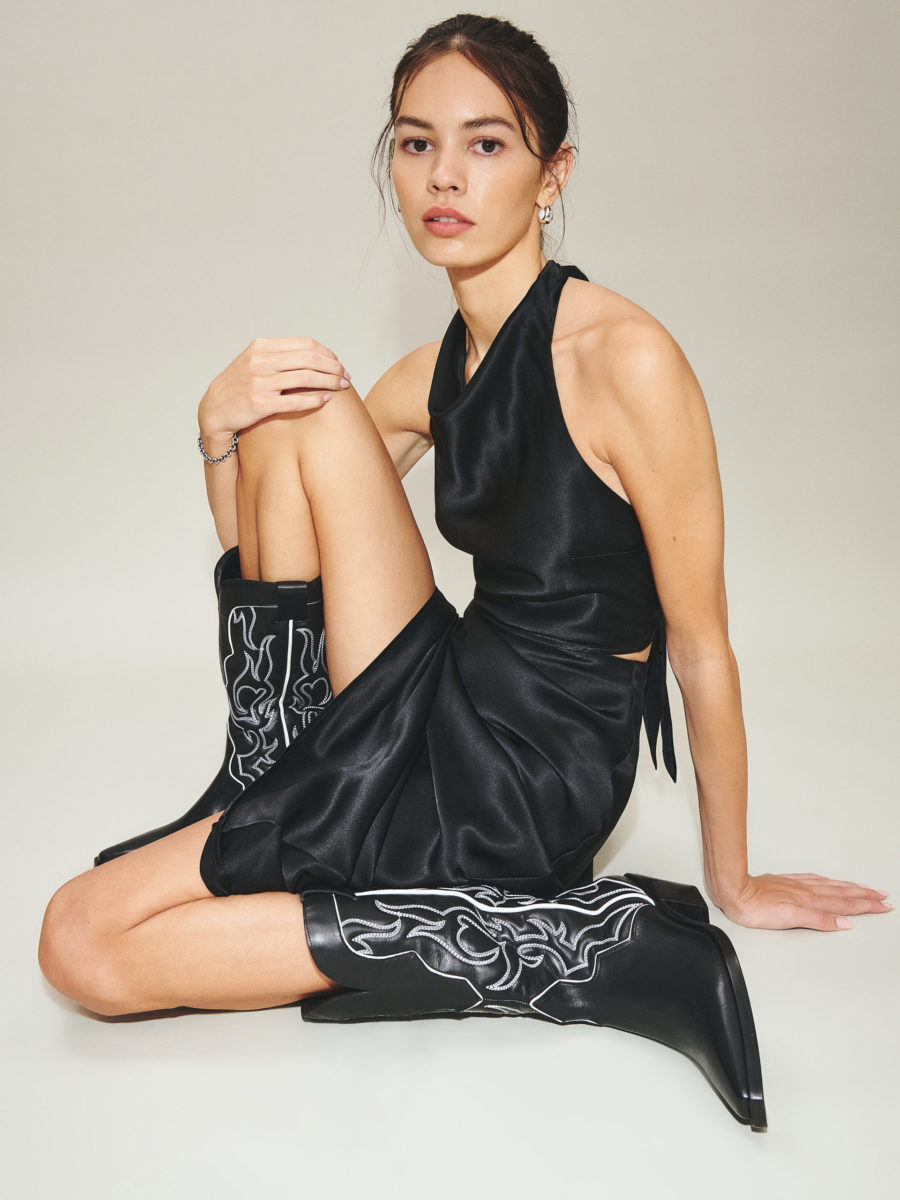 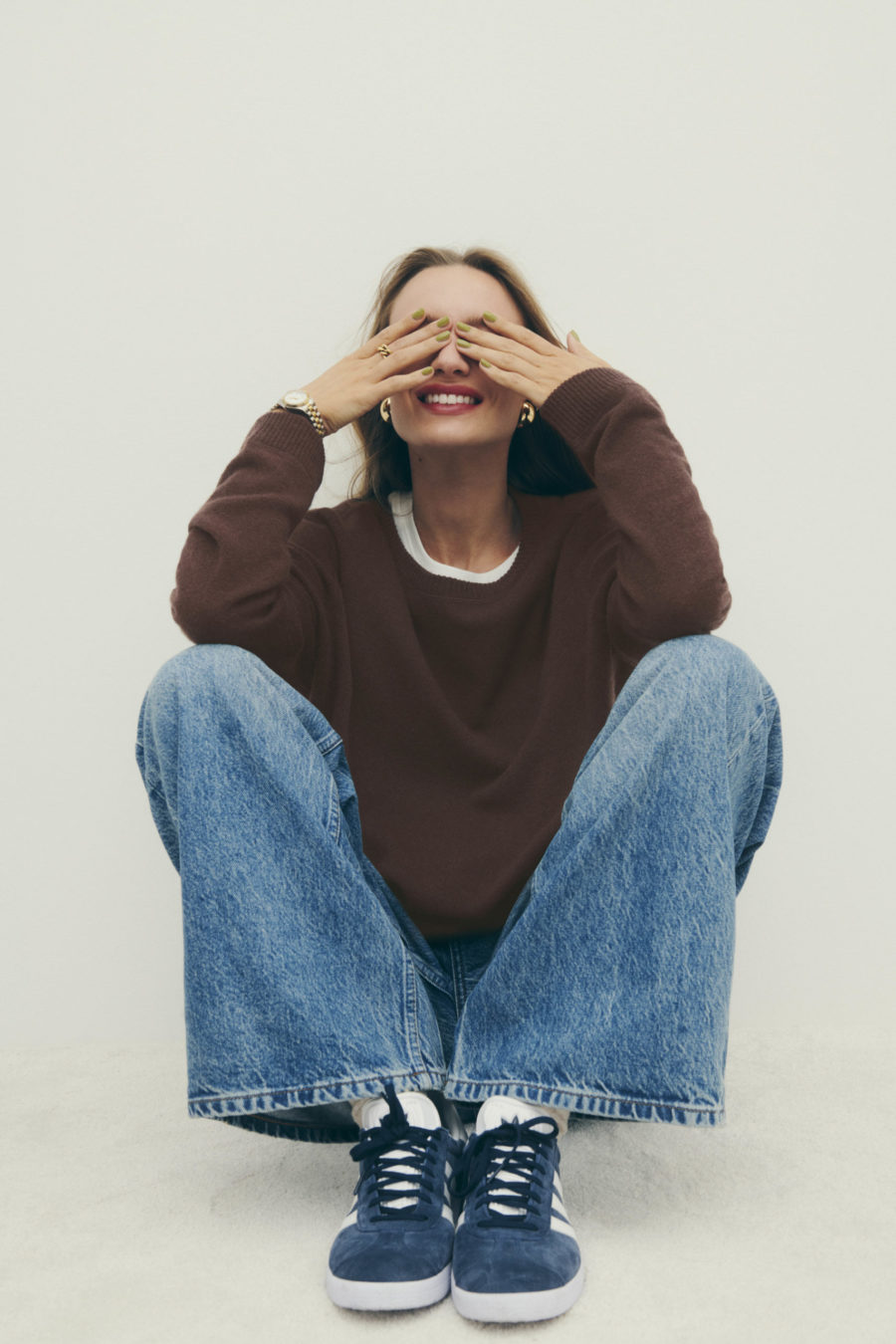 LA brand Reformation began its life in 2009 as a vintage store founded by Yael Aflalo. Aflalo had previously run her own clothing line, YaYa, and the mission with Reformation was to create a clothing business that was not dependent on the egregious environmental practices of the legacy fashion industry. In 2013, Reformation opened its own sustainable clothing factory in downtown LA, and by owning its own supply chain, it allowed for shorter production cycles and strategic smaller-batch production, a model that cut down on inventory and waste.

Borenstein, who grew up in Miami, and began her career as an analyst at Bain before earning her retail stripes as a merchandiser, had her own epiphany about the inequities of the fashion supply chain when she was working for a children’s apparel business. “I remember I was sitting on the phone late at night with the head of production. We were making T-shirts for $2, selling them for $8, maybe $10, but we’d promo like crazy and it was this downward discount cycle…and I was asking, ‘What can we do to bring this cost down?’. I went home that night and it just hit me: T-shirts for $2? It doesn’t even make sense. When you think through the human supply chain, it’s not valuing labour appropriately. I had this moment of accountability where I realised, this is just wrong. This is not how I value human work.”

A little while later, Borenstein happened to meet Aflalo and made a visit to see Reformation’s factory in Los Angeles, where the environment was, as Borenstein puts it, “more consistent with my values. And that’s what actually compelled me to make the jump.”

Borenstein joined the Reformation team in 2014 as the Director of Merchandising. She also served variously as Vice President of Merchandising, Design, and Ecommerce, and President during a period that saw huge growth for the company (opening stores in the US and beyond, and raising $37million of investment between 2015 and 2017). True to the brand’s founding mission, it demonstrated increasingly robust tracking and reporting of its environmental credentials as it grew. It was certified as carbon neutral in 2015.

“It felt like we had a real opportunity to double down on what was right…making sure we lead the conversation. So many fashion brands are claiming all these green claims, it’s almost ubiquitous. But not enough are really doing as much work as they need to. What that meant to me was asking, ‘How do we push the envelope further, so that we can be clear to other businesses that this is the path and set an example?’”

But not everything has been smooth sailing. 2020 was a tough year to be in business for any fashion company. For Reformation, a brand synonymous with the insouciant LA cool-girl dress, that suddenly no one had anywhere to wear, was no exception. More painful still, in June of 2020 year, Aflalo was to step down from her position of CEO, following the allegation of racism from Reformation employees (five months later, an independent investigation by Chicago law firm Morgan, Lewis and Bockius LLP found the culture of the Reformation, and the actions of its former CEO, not to be racist).

Borenstein, who took on the reins as CEO, says it was paramount in the wake of the crisis to put Reformation’s people first and be “super honest and authentic with our team”. Bringing in a third-party investigation was important in “getting to the bottom of what was going on,” she says. “That level of seriousness and truth-finding was important to rebuild trust and maintain trust, because when you lose trust, what is there?”

She concedes that in Reformation’s pursuit to scale, there were things that the company could have done better. “We didn’t put enough time and attention on the HR side of the team, as we were scaling so quickly. We needed to really home in on our culture.” To bring about some corporate healing, Borenstein spent the early weeks of her role as leader holding listening sessions with the Reformation team, sharing her vision, and hearing their recommendations. “A very defining moment for my leadership,” she admits. “I think that level of authenticity is incredibly valuable in today’s day and age, and that’s probably a defining characteristic of who I am.”

Coming out of that crisis had been about getting back to Reformation’s core values. “It felt like we had a real opportunity to double down on what was right…making sure we lead the conversation. So many fashion brands are claiming all these green claims, it’s almost ubiquitous. But not enough are really doing as much work as they need to. What that meant to me was asking, ‘How do we push the envelope further, so that we can be clear to other businesses that this is the path and set an example?’” (At another moment in our conversation, Borenstein tells me that Reformation often allows its roadmaps to be shared with other businesses: “We want other people to use the work that we are doing.”)

“The more consumers demand it, the more consumers recognise that buying the $4 piece on some fast-fashion site comes with consequences. It’s consumer behaviour, I think, that will accelerate change.” 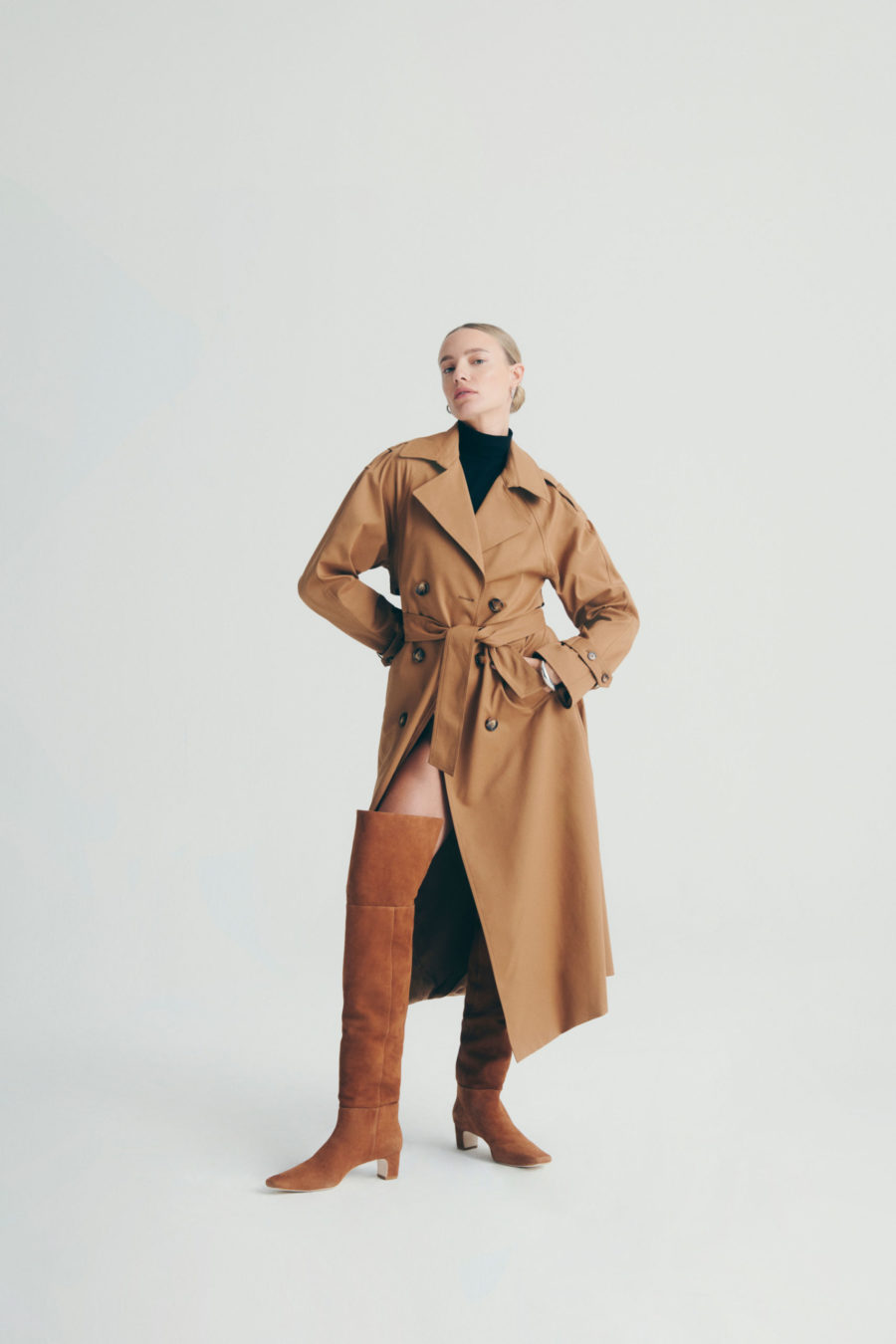 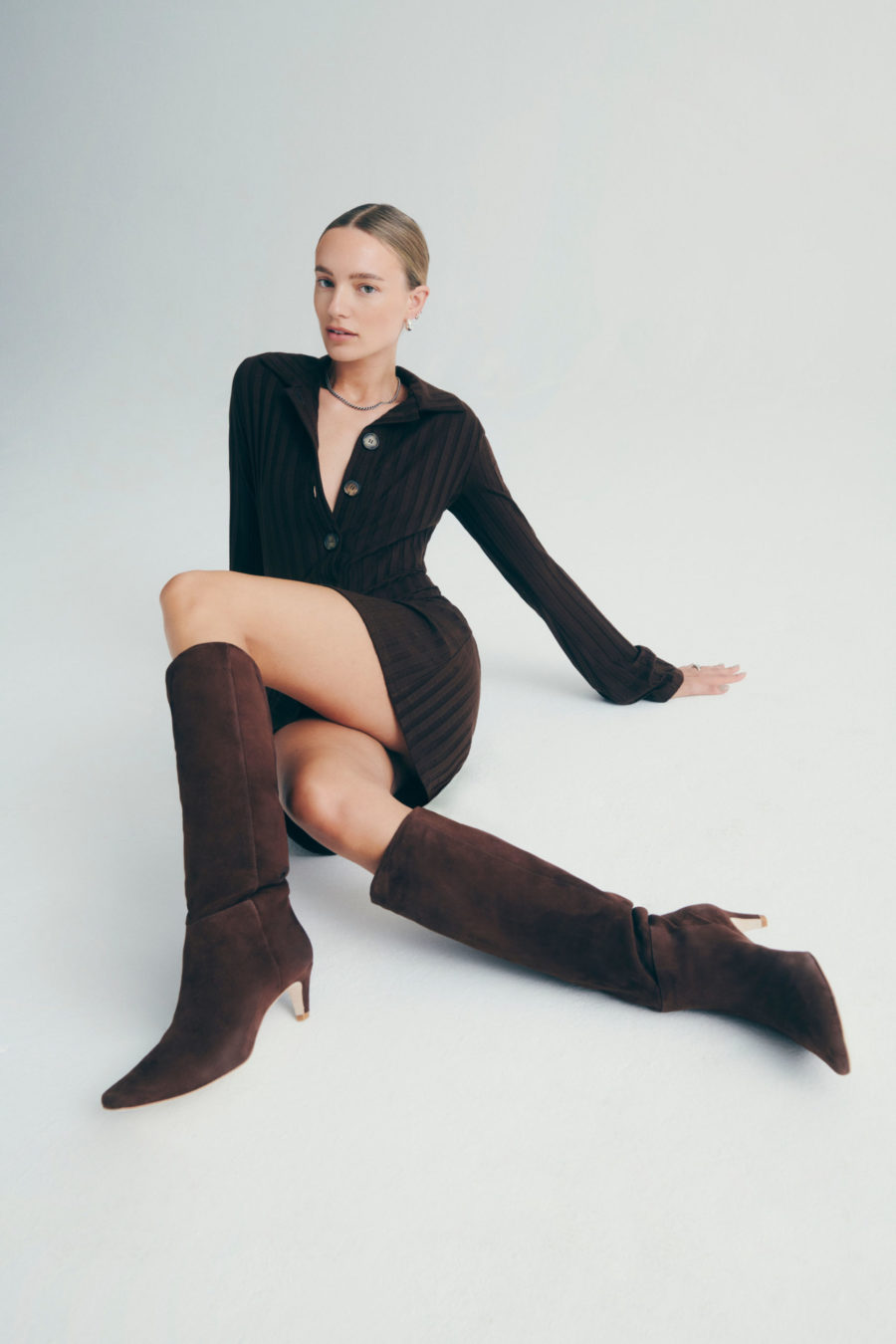 As with her own teams, speaking to the customer with authenticity is also fundamental for Borenstein. And for a brand like Reformation with a broad reach, this often means offering different levels of information. “If you are super studious and well educated, and want to go deep, it’s really important to us that you can go on our site [and] see every single technical bit of background data about how we calculate our greenhouse gas emissions, what our carbon positive roadmap is… We are very rigorous and transparent on all of that because we believe it’s important to the people who really want to get deep. They should be able to understand where we are and help us if they see an opportunity to call it out.”

“I’d say that for the majority of our customers, who probably aren’t as technical, they just want to make sure that we are doing the right thing. And so, we have taken the approach of making sure [sustainability] is top of mind, without making it too serious. Not everything has to be bad news. Right now, when you look at the news, it’s just so daunting.”

With smart materials innovations, attention-grabbing marketing activations, like Reformation’s recent ‘No-show Show’ (a virtual runway starring Carolyn Murphy and others, which ran on social channels and billboards to coincide with the start of New York Fashion Week), and cute, shoppable collections that are ever-increasingly recycled, regenerative or renewable, Reformation makes a compelling case for shopping sustainably and looking damned lovely.

Beyond her own business, how does Borenstein think real change can be sustained at an industry level? She says government regulation needs to play its part. “If you look at the history of movements across organic foods, or cigarettes – areas where we have made progress to be better societally – governments did play a really important role. Asking corporations to regulate themselves is just really hard. And frankly, retail businesses right now are under pressure.”

And, of course, the consumer is key. “The more consumers demand it, the more consumers recognise that buying the $4 piece on some fast-fashion site comes with consequences. It’s consumer behaviour, I think, that will accelerate change.”

What else is on the roadmap? “International expansion is a huge area,” she says. “The UK has been incredibly welcoming to us. In London in particular, you guys push us further on style and where trends are going.”

Did she have any other London takeaways? “The pub is, to me, the most phenomenal thing,” she replies with a smile. “This idea that everyone is welcome. It doesn’t feel cliquey at all, it feels very collective – that was something where I felt like the energy was powerful.”

“Also, the individuality around style and fashion in London was exciting to see. It doesn’t matter your age or your occupation, everyone has their own approach. That feels different to the US and that is something I would definitely love to integrate more into the way we think about our business.”

Who could argue with that? Reformation, innovation and personalisation… with a smile.