You can enjoy the schuss, the spirit-lifting vistas and the sybaritic pleasures of an alpine holiday, without taking a toll on nature. Here's how...

On the face of it skiing looks like a wholesome, back-to-nature pastime but once you factor in trees cut down and land bulldozed to make ski runs, planes full of skiers plying backwards and forwards, fossil-fuel-powered lifts,  and energy-guzzling snow cannons blasting out the artificial snow used more and more to supplement the (melting) real thing,  it is a grim picture.

The skiing industry has known for some time that it can’t survive global warming without action: the season will get shorter and shorter unless drastic measures are taken, and skiers – and resorts – need to be fighting against – not contributing to  – the problem.

With the help of new technology (and some old methods, too), many resorts are upping their green game:  going carbon neutral, like Pyha in Finland, installing hydro-electricity as in Chamonix, Mayrhofen or St Anton am Arlberg, banning all plastic as in Italy’s Pejo 3000, or going car- free like Avoriaz.  Flims Laax, in Switzerland, became the first self-sustaining Alpine resort by using electric transport and installing photovoltaics, hydro- and wind-power. Finland’s Ruka has brought back the ‘snow farming’ system used in the 1970s, where snow fences help retain snow,  thereby reducing the need for cannons, and snow from one year is even preserved to repurpose on their slopes to start the following season early.

Snow cannons have a big impact on a resort’s carbon footprint, and due to lack of rainfall in Europe, and increasing temperatures causing less snow to fall, they are needed more and more. They work by shooting compressed air and cooled water high into the air, making snow pellets not flakes, so the consistency of the snow is different.  Snow cannons are big energy users, but can be run on hydro power, as shown at Whistler, Canada

As skiers, our choices – where to ski, what kit to wear, where to stay, how to get there. –  make a big difference.  Check out activist groups such as Mountain Riders, Save Our Snow, Protect Our Winters to find out how you can be a greener skier. 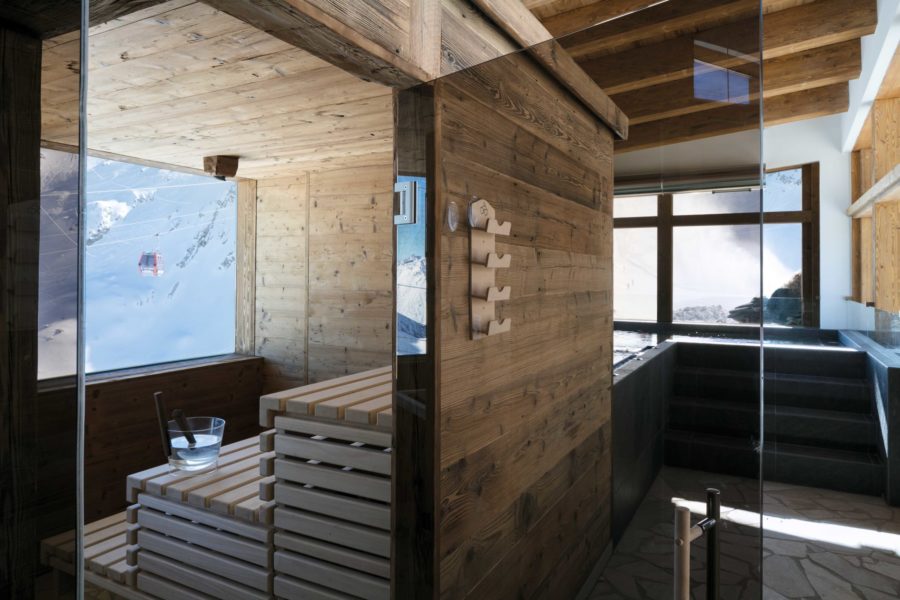 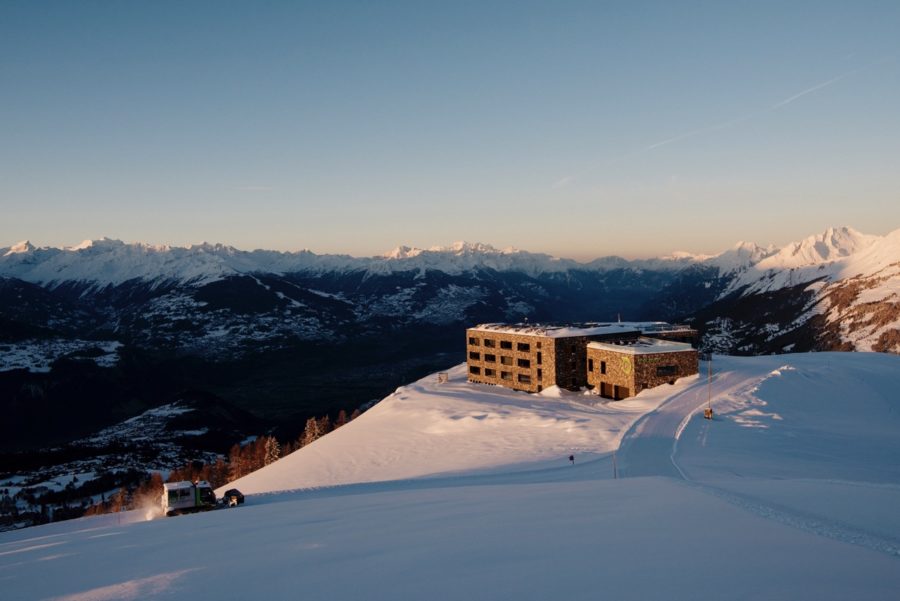 The skiing industry has known for some time that it can’t survive global warming without action: the season will get shorter and shorter unless drastic measures are taken, and skiers – and resorts - need to be fighting against - not contributing to  - the problem.

As of this weekend, the French have tightened up entry rules for Brits, and holidays there are off the cards. There are still plenty of ski destinations we can go to but before travelling always check gov.uk, for updates on each country’s entry requirements.

In the heart of Pyhatunturi, the world’s cleanest ski resort, and surrounded by the Pyha- Luosto National Park (Finland’s oldest), these cosy, eco-friendly, wood and glass igloos have solar panels in the roof, air heat pumps to reduce energy consumption, and are heated by geothermal power. 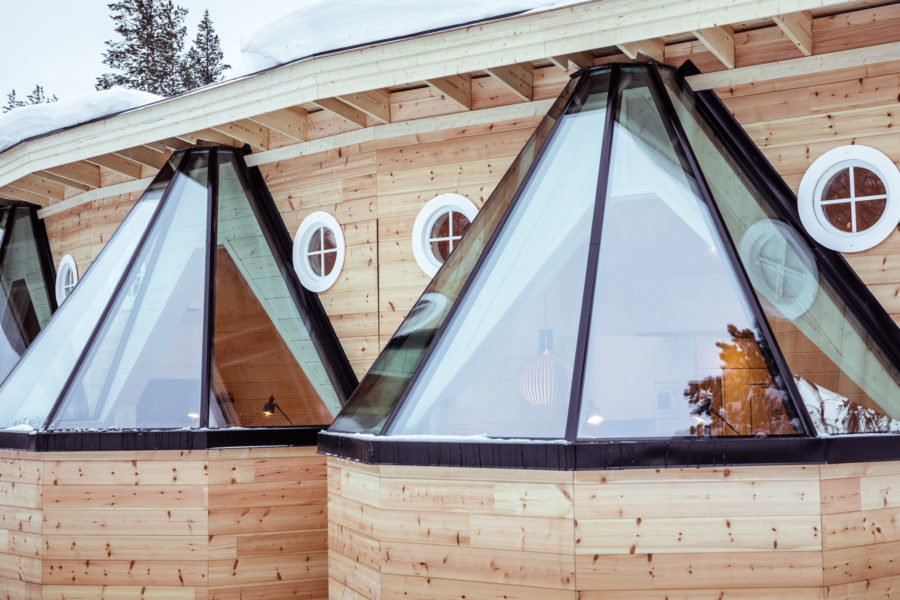 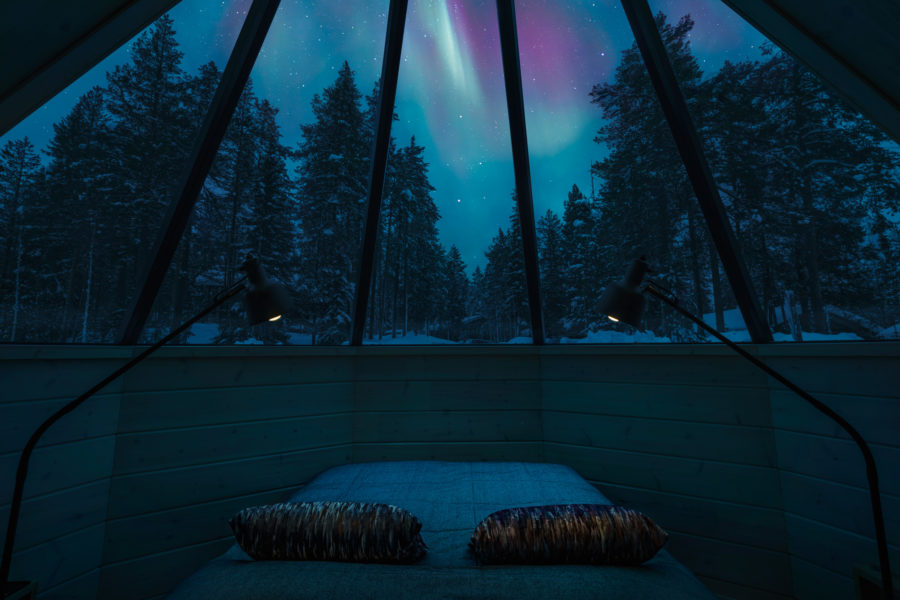 Capanna Presena, in the Stelvio national Park, is one of four new mountain ‘huts’,  part of the region’s new environmental and social sustainability project. They are all run on renewable energy, ban plastic, use Ecolabel products and serve local organic food and wine.

Capanna Presena has a spa, a restaurant, three igloos, and eight suites with glacier views, each sleeping 2 – 4 people. Done in stylish reclaimed timber and local stone, the style is simple luxury, and the setting magical.

Rifugio Passo Tonale, Doubles from £170, half board, check with resort. 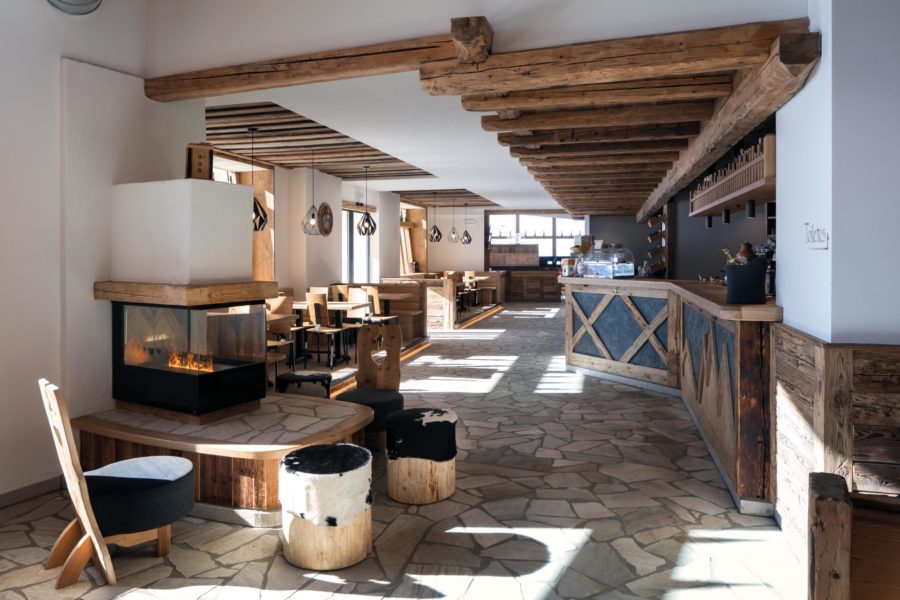 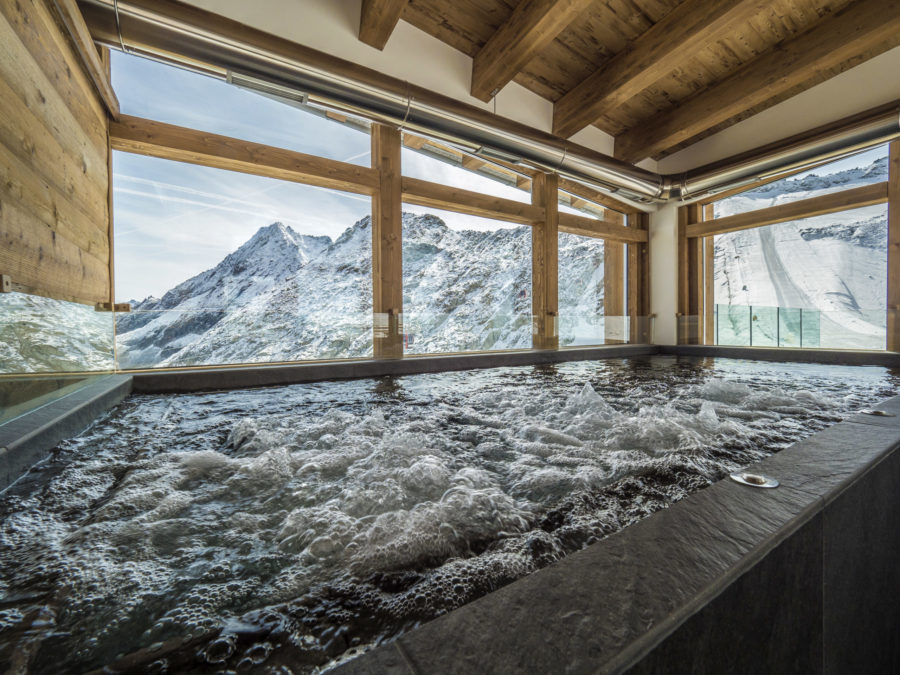 Converted from abandoned cable-car station, this super-stylish ski in/ski out hotel is so off-the-beaten-track you need a snowcat, skis or snowmobile to reach it. The 16 rooms have panoramic windows and oak floors, and the whole building is upcycled, glass wool insulation reduces energy consumption, solar panels heat the water, and photovoltaic panels provide at least 50% of the electricity. Furniture is all made by local craftsmen, and food comes from neighbouring suppliers. 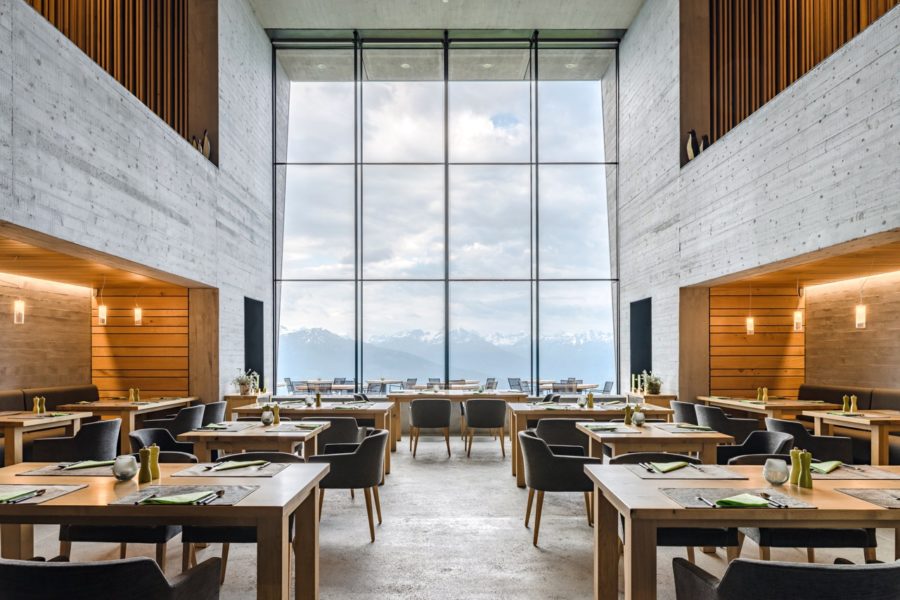 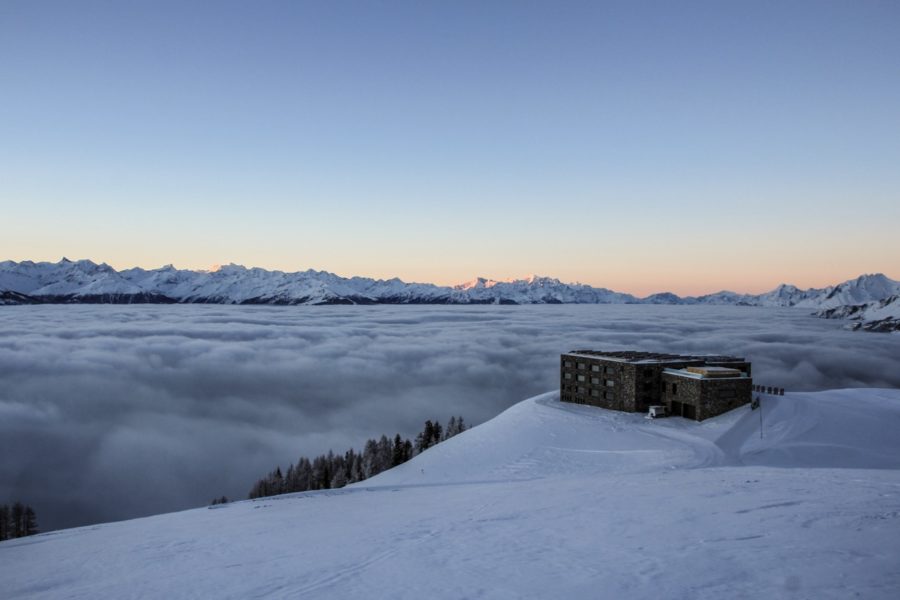 This contemporary version of a traditional ski/ hunting lodge was revamped in 2020, adding the Mountain Ashram Spa and the Overlook Lodge, with ecological and social responsibility as core principles.

A new geothermal heat pump generates 95% of the hotel water and heating; food for the three restaurants is sourced from a 150 km radius. Tap water goes through an osmosis filter for mineral water quality drinking, and profits support safe drinking water worldwide through the WIR – Water Is Right – Foundation.

It is the first hotel in Switzerland to have Ibex Fairstay Gold Label status, and guests can donate three francs a night to My Climate, 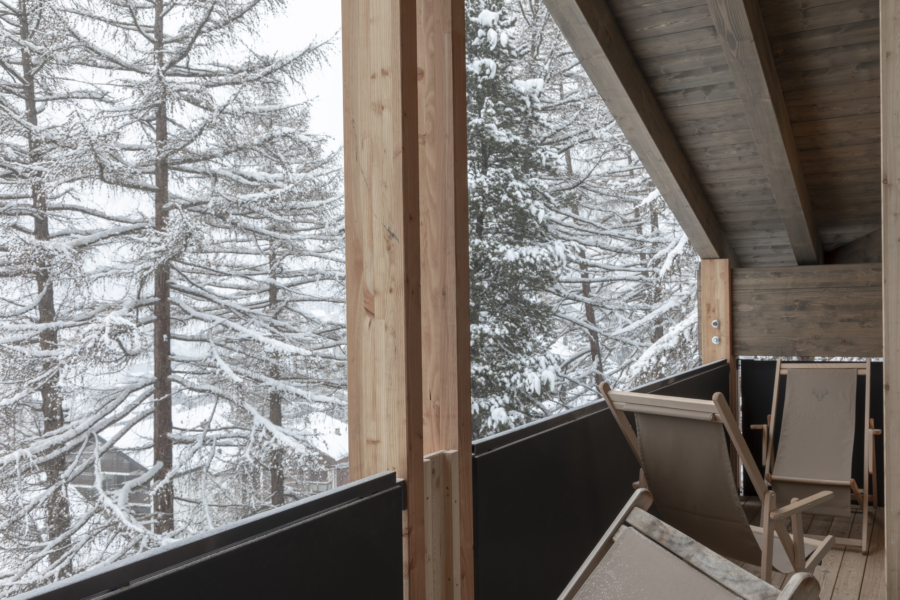 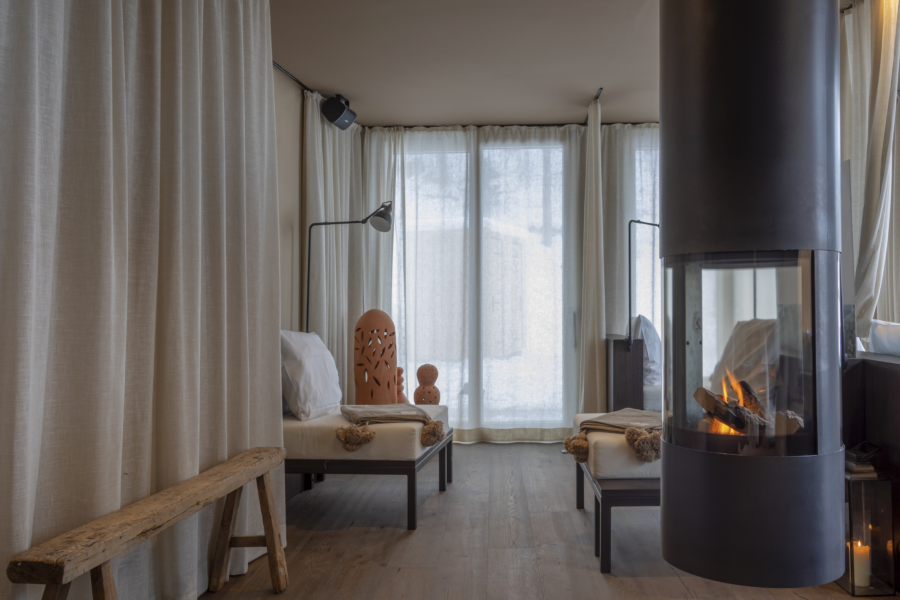 Overlooking a tiny lake, this contemporary mountain lodge has a Class A energy certificate for using renewable building materials.  Set in Champoluc, in the Monterosa ski area, which operates on 100% renewable energy, the hotel has 26 rooms with mountain views, a spa with a Finnish sauna, Kniepp baths and hydro massage, and a pool with huge windows showcasing the snowy outdoors.

Book through Ski Solutions, which has a dedicated eco-ski section, and offsets through Mossy Earth 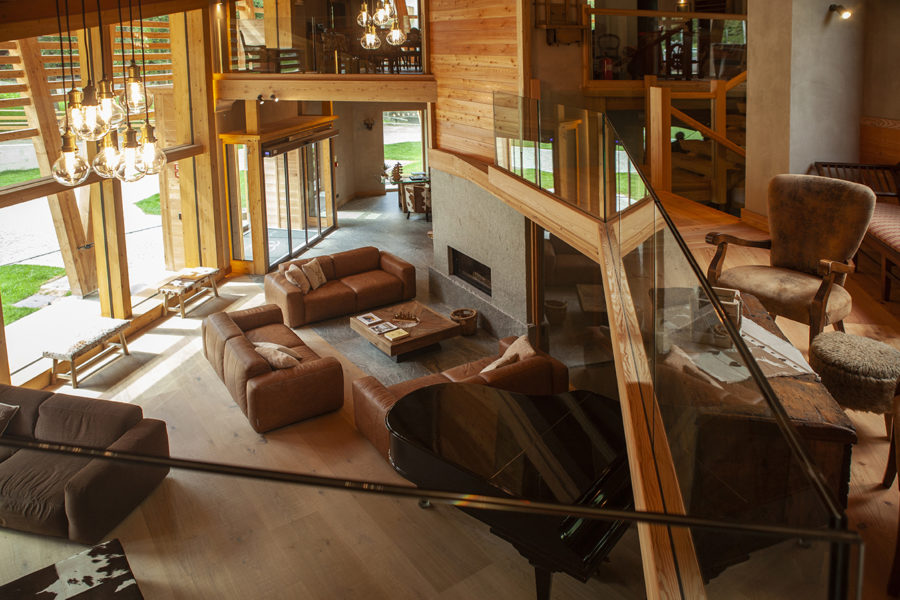 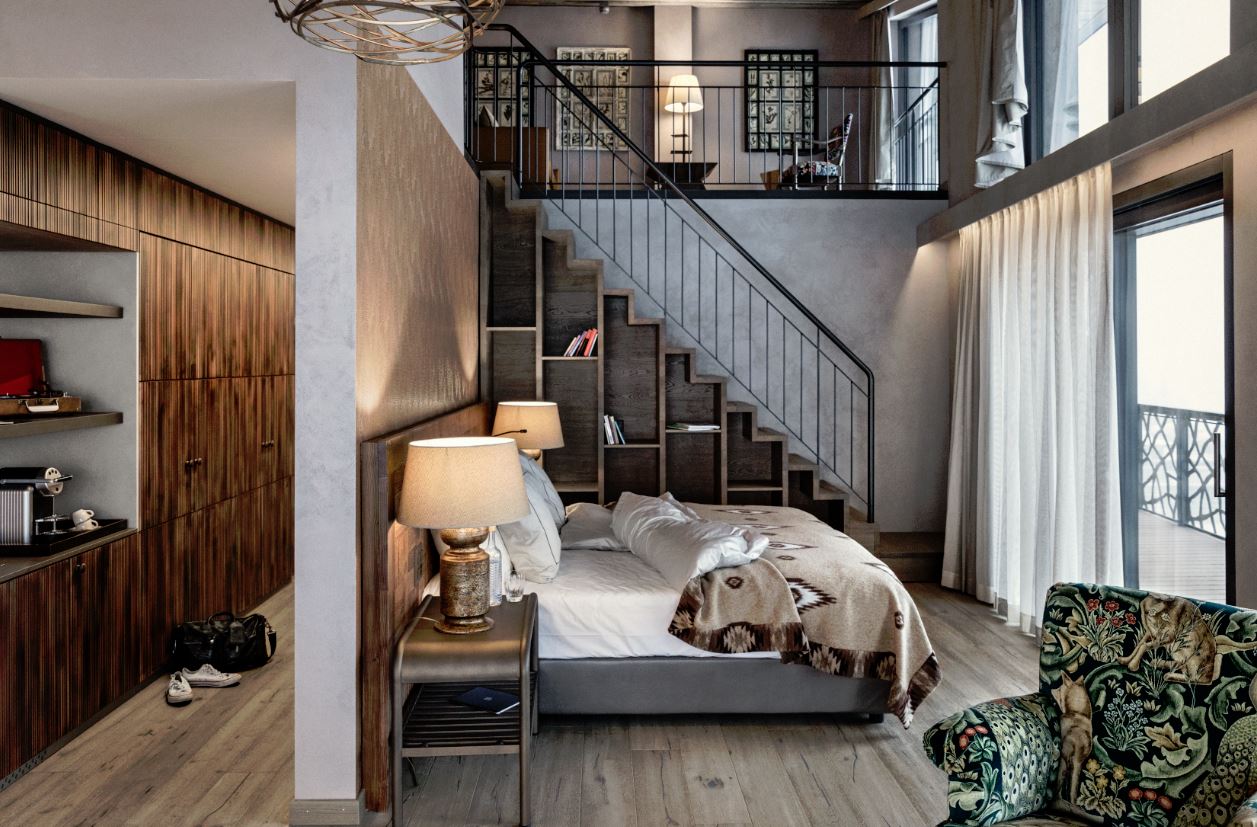 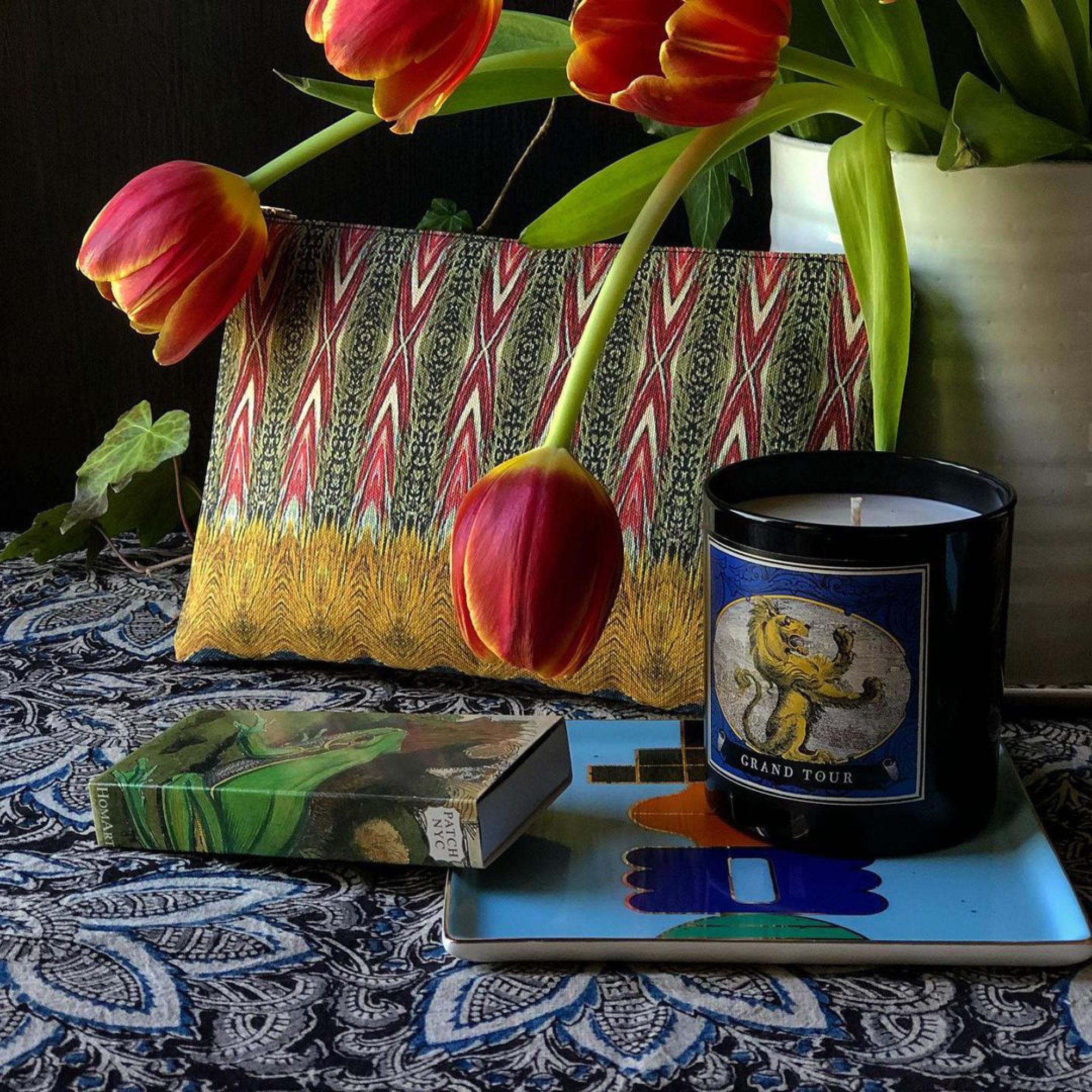 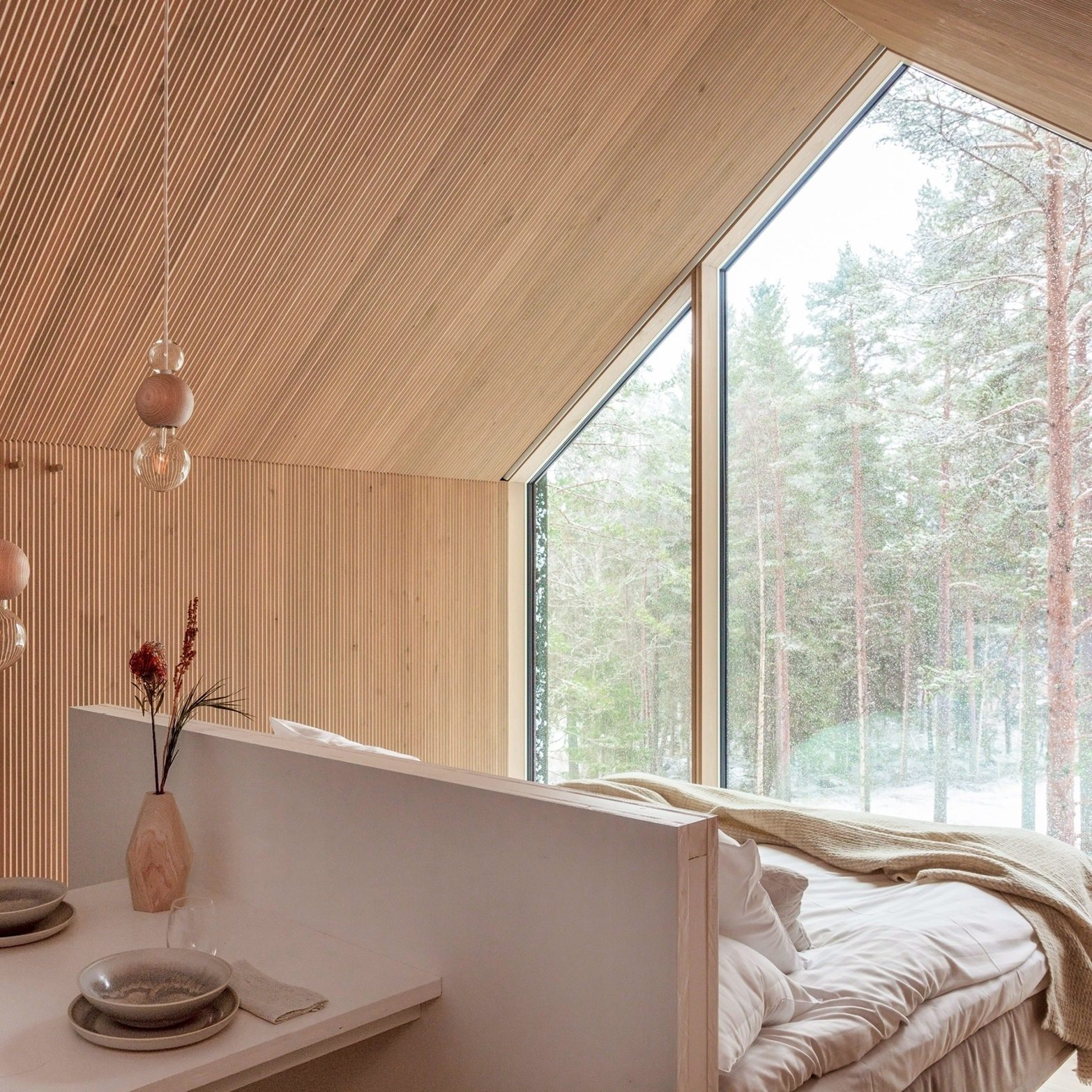 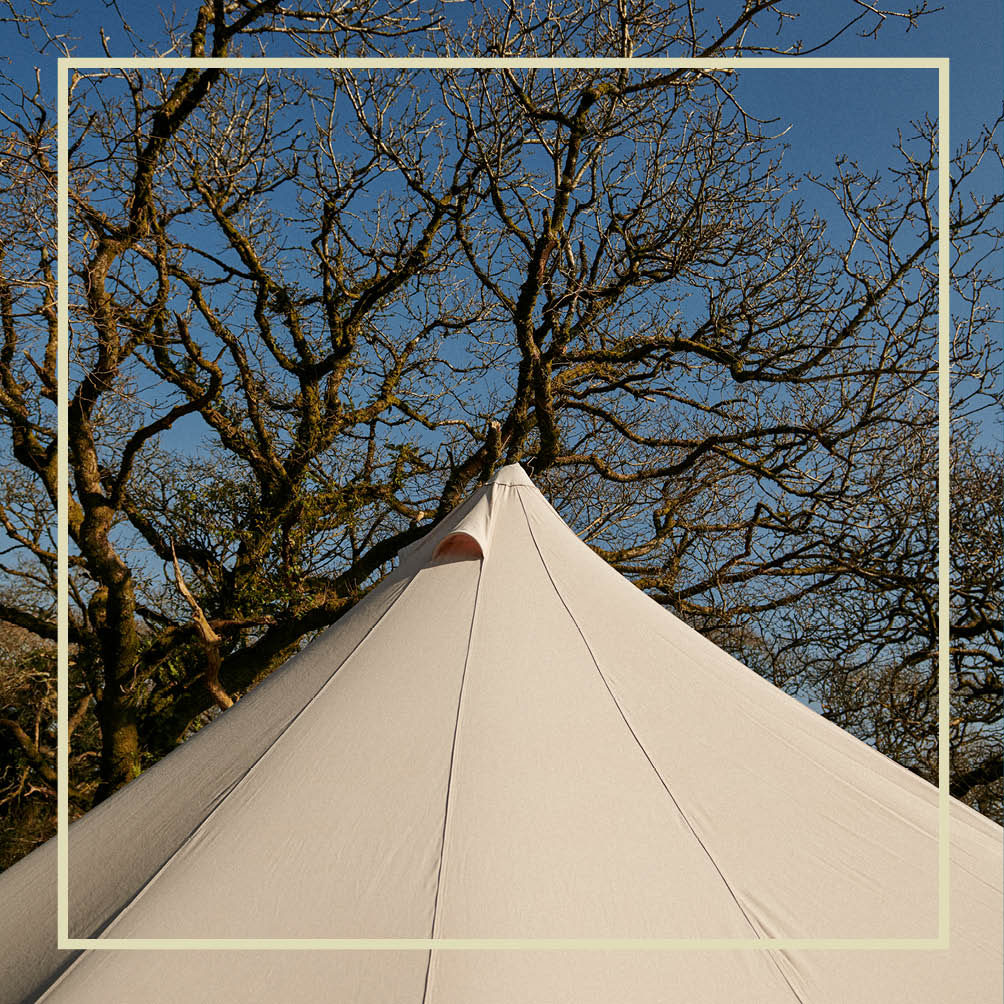 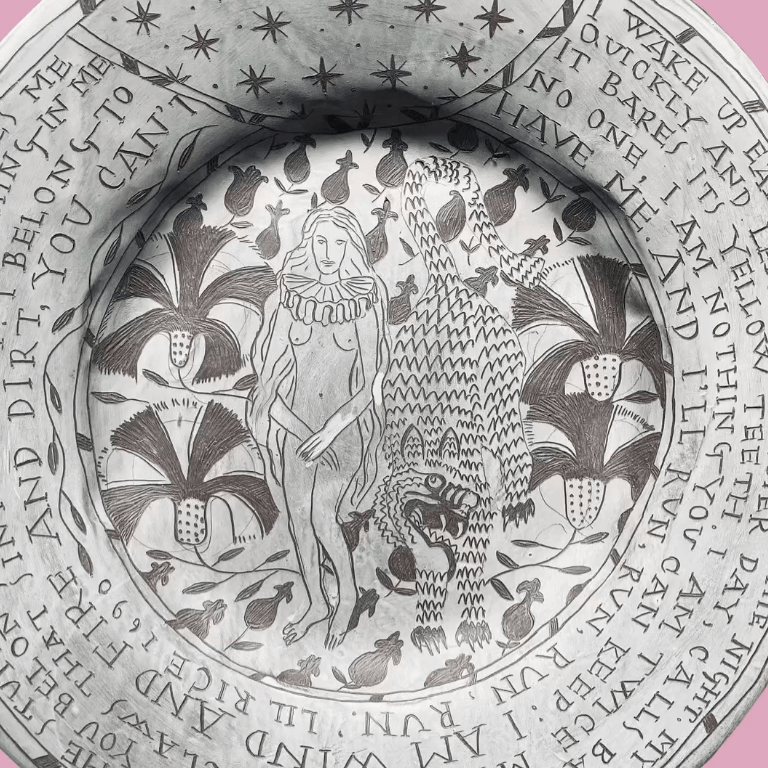 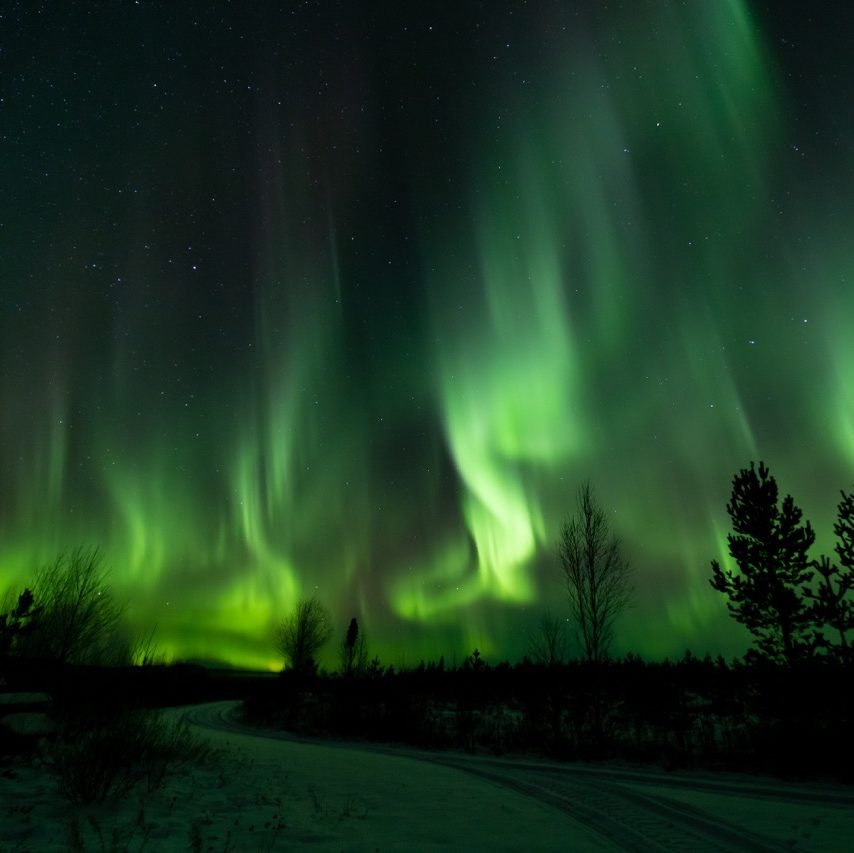